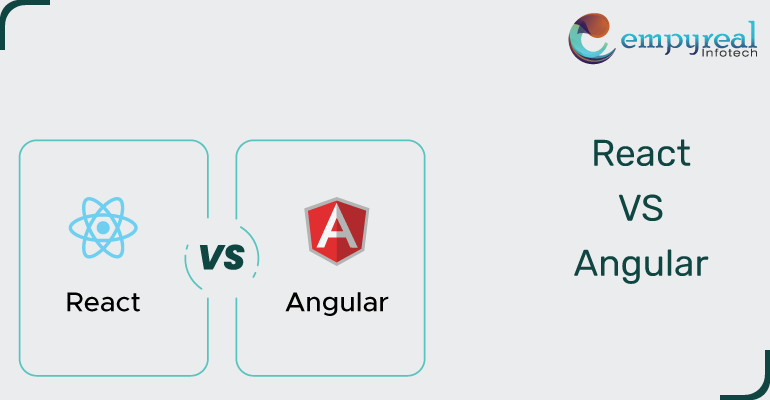 Today we would like to discuss the factual difference between two web-developing mainstays - React and Angular. Bear in mind, we don't want to put the two up against each other. Our goal is to explore the difference between them to highlight the stronger and weaker sides of both.

The reasoning behind such an outlook on our topic is quite simple - both Angular and React are, undoubtedly, exceptionally good and functional. That's why it would be a disservice to the cause to try to categorically decide which one is better than the other.

That being said, such a topic would be unable to exist without any comparisons at all. We would collate and find a sort of champion in some categories. And now, let's get down to business.

When discussing a topic like ours, it is quite mandatory to do it justice. And to do that, we need to discuss our compared participants separately first. So, now would be a perfect time to give you a little overview of what React is and how it functions.

So, by official documentation, React is “a library for building composable user interfaces. It encourages the creation of reusable UI components, which present data that changes over time”.

React is a useful tool that one can use to create all kinds of websites and web apps. It was created by Facebook and Jordan Walke in 2013 and since then has been an irreplaceable part of many JavaScript front-end developers’ lives, gathering a huge following of contributors.

Furthermore, React's developing and ever-growing user base allows for quick and efficient issue solving, as there is always a ton of people, able to contribute their knowledge and advice in the time of need. It is also pretty simple to work with, making it a good choice for those, who only start their work with JavaScript frameworks.

Now, let's take a peek at what features React possess:

Not necessary to use, but quite convenient nonetheless, JSX is JavaScript's legacy in React. Put simply, it is a syntax tool that helps React to understand how the UI should look.

In a way, JSX creates React's elements. Rather than artificially separating technologies by putting markup and logic in separate files, React separates responsibility through loosely coupled units called “components” that contain both markup and logic with JSX's help.

Flux is a pattern, implemented in React, that helps to keep your whole data flow one-directional. That, in turn, complement's React's composable view components.

React is, as we've already mentioned, is pretty easy to learn, making it a good choice for novice front-end developers

React's syntax is HTML-like, which allows for highly detailed documentation and templating;

React support such a useful feature, as server-side rendering;

React's documentation might appear lacking and poor, when compared to other frameworks and libraries;

The full view of Model-View-Controller is unavailable, supporting only part-of-MVC view;

Also, easy to learn the React itself, JSC might be a concerning barrier for new developers.

All that being said, React also has other limitations, such as being a front-end library, which means covering only the view layer of the app, thus creating a need to use other technologies to complete the full developer tooling set and a slight increase in the learning curve for new developers due to the usage of inline templating and JSX.

But, nonetheless, when it comes to creating multiple events apps, as well as creating sharable components for the app, React has few competitors. And that's not taking into consideration the exceptional convenience in the situations when your app needs personalized solutions.

The final misconception about React we want to mention is the belief that React needs Redux for its ecosystem. We won't try to argue with the fact that Redux is indeed commonly used with React. And it proves to be quite a useful tool, as modern developers quite frequently need to juggle many states between various components, and handling complex apps might become somewhat problematic.

Now, let's have a closer look at the other today's web-development mainstay - Angular. And, first and foremost, let's get to know what it is and what it is used for. Angular is a TypeScript-based open-source web application framework. It was created in 2016 by Google and not so long ago, in May of 2021, Angular has got a stable release.

This framework is mainly used for client applications creation and is widely used as one of the best tools for single-page applications front-end. It is also one of the oldest (but not worth from it) frameworks on the market today, and, due to terrific support and backing of a humongous number of contributors, Angular is extremely convenient for the knowledgeable, but has a pretty steep learning curve for the new users.

It has an interface that reminisces material design;

Angular is, after all being said, just an exceptional high performing full-stack framework.

There is a need of knowing TypeScript and other components that are specific to Angular;

Angular's documentation is not all-inclusive;

Despite being a full-stack solution, there still can be situations that will require third party integrations. And these integrations might be complicated;

It also comes with such features as Directives, Forms, Pipes, HTTP Services, Dependency Injection, and many-many more, making it a terrific framework for building sophisticated complex web and mobile applications, adapted for every device imaginable.

Now let's talk about the features that Angular possesses and React lacks. First of all, as was promised, we take a look at a little twist we were talking about when discussing data binding. Both React and Angular, as we've already said, are implementing one-way data binding, but Angular is also capable of two-way data binding

Second feature that Angular has is the ease and simplicity of updating. As Angular is independent from any third-party components, the updating process is seamless and, in fact, fully automated from the developer's end of the ordeal. React, on the other hand, has a harder process in that regard, as the third-party components need to be checked upon for updates.

These website design trends for 2022 can work wonders if you develop them with planning & expertise. Get inspiration from this list, turn your plan in...

If you are planning to get a website for your business or need to redecorate your website, you must be searching for the best web design companies! We...

What are Agular and AngularJS?