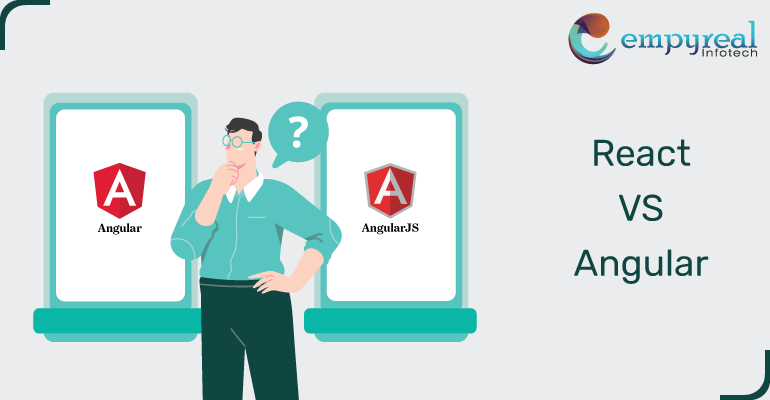 What are Agular and AngularJS?

Angular and AngularJS are web development Frameworks by Google. The names might confuse the readers, but they are completely different from each other.

So if you want to know what they are and how they are different from each other, here, is what you have from Empyreal infotech's blog with a whole new session on Angular and AngularJS

Then we're going to put forth the reason why we have to compare Angular and AngularJS, and then we'll be comparing these two Frameworks based on the various comparison factors like.

What exactly is AngularJS?

AngularJS is an open-source JavaScript framework that is used for front-end web development. It is maintained by Google and the community of individuals and corporations inscribe many of the challenges faced in developing single-page applications.

What exactly is Angular?

Angular on the other hand is a total rewrite of AngularJS. It is based on typescript, which is also an open-source programming language developed by Microsoft.

Typescript is a superset of JavaScript, the Typescript Angular introduced An object-oriented programming Paradigm into web development.

There are many versions of Angular that is Angular 2, Angular 4 Angular 5, Angular 6, Etc. Currently, the version that is most widely used in Angular 8, however, Angular 9 and Angular. 10 also have been released on the 6th of February 2020 And the 24th of June 2020.

However, it is important to note that AngularJS and Angular are completely different Frameworks. And as mentioned earlier, AngularJS is a JavaScript Framework.While Angular is based on Typescript therefore to learn Angular No knowledge of AngularJS is required.

It is also important to note that AngularJS and Angular versions 2 to version, 7 are no longer supported, hence. You will have to make use of Angular 8 +versions.

So now let's compare these two

Angular, on the other hand, is built using Typescript, and Typescript is the superset of JavaScript. It provides more advanced features. Thereby. Helping developers create better, web applications.

Hence, the business logic is a little within the model, while the output that you want is written within the controller to this AngularJS generates the model pipeline, And with the model pipelines perform all the processing to drive that output, on the other hand, Angular makes use of components and directives. Angular directives are functions that are executed, whenever they are discovered on the dome by the Angular compiler.

These directives empower, the applications HTML through advanced syntax components are nothing but directives with a predefined template.

The reason for them to be defined specifically using @ component decorator is that components are very much particular and main to Angular.

AngularJS does do not provide support for mobile browsers, but Angular is compatible with them.

Expressions are used to bind the data of your application to the HTML, AngularJS requires a special NG directive for property binding and event binding.

Angular on the other hand makes use of a regular basis for event binding and square brackets For property binding,

Dependency injection is a whiter application design pattern, In this coding Pattern classes are injected with the required dependencies rather than hard coding them within the class itself.

When it comes to the structure of these two Frameworks, the Angular structure is quite simplified and makes the development and maintenance of lot applications Very easy. AngularJS on the other hand is difficult to manage.

Routing helps in navigating from one page to another in a web application, inAngularJS $routeprovider.when() function is used for routing convicts in Angular RouterModule.forRoot([...]) is used to configure the routes.

AngularJS lacked the Angular CLI, and it was a pretty hefty task for large applications to organize the code loading of JavaScript file debugging code and the involvement of third-party libraries, This was resolved whenAngularJS was written again completely and named as Angular.

This is because Angular provides a much better algorithm for data binding and a component-based architecture.

So this brings us to the end of the Discussion.

We hope you guys have enjoyed and learned something new.

In case you have any doubts or queries, please do let me know in the comment section and We will revert to you at the earliest.

We'll be back with more and more exciting sessions.

But till then goodbye and take care.

I hope you have enjoyed reading this blog.

Please be kind enough to like it and you can comment any of your doubts and queries and we will reply to them at the earliest.

Do lookout for more blogs in our blogs section.

These website design trends for 2022 can work wonders if you develop them with planning & expertise. Get inspiration from this list, turn your plan in...

If you are planning to get a website for your business or need to redecorate your website, you must be searching for the best web design companies! We...